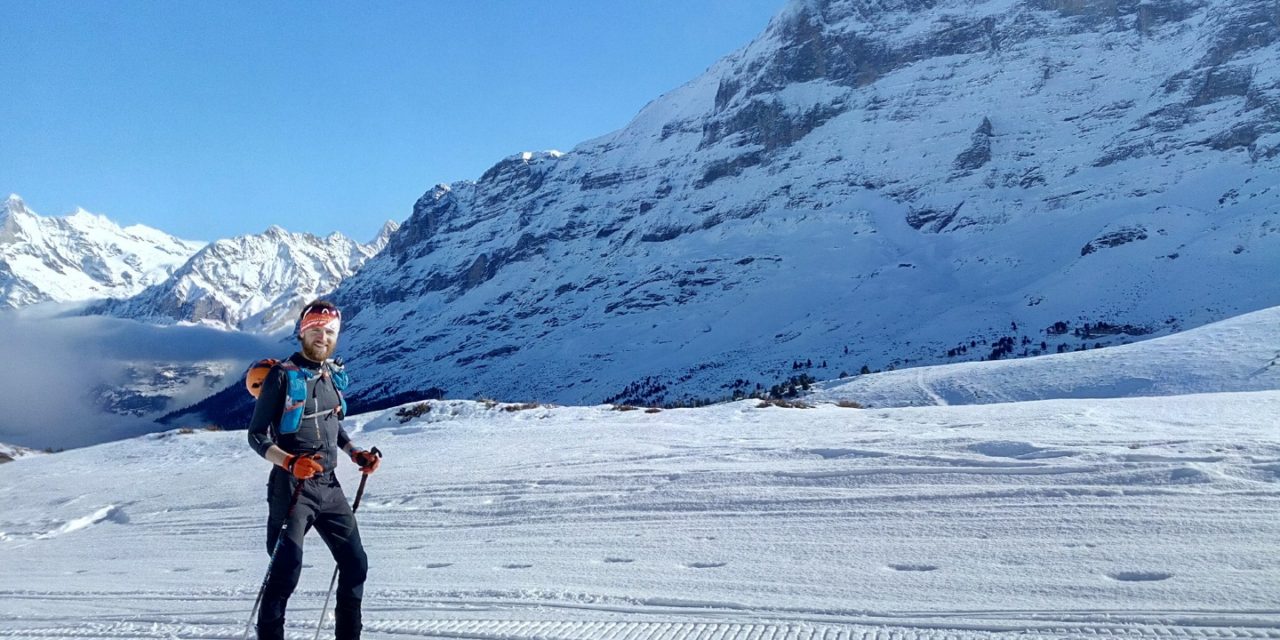 In the winter, it’s not a question of whether you’ll run or not. It’s more about knowing how you can best prepare to go running! Here are some pro tips for making the appropriate adjustments to winter running and helping you be ready to tackle Tremblant’s 24h challenge!

Athlete Sarah Bergeron-Larouche is one of the best trail runners in Quebec. For this former snowshoeing champ, winter sports are a breeze. It doesn’t matter whether it’s 5 or -25 Celsius – she’s ready to go play outside!

Having said that, “in really frigid conditions, it’s not a good idea to run intervals. If you do it too often, you can develop issues with damaged bronchial tubes,” Sarah points out.

Interval running is a training method that alternates bursts of short, high-intensity activity with periods of lower intensity. When the temperature hits -15C, therefore, Sarah runs at a moderate intensity to prevent damage to her lungs.

She also adjusts the length of her training. “Running in winter is more demanding, so you don’t need to run for the same length of time as usual. A two-hour run can thus be shortened to 1.5 hours,” she notes.

It’s how you feel, not how fast you go

What makes cold-weather running more demanding? The short answer is: our internal furnace! Physician and runner Simon Benoit explains that the body needs to produce more heat to fight the cold. “The energy expenditure is much higher because of it,” he says. Shivering and getting gooseflesh are caused by muscle contractions and thus require energy.

With the body expending so much energy to keep itself warm, there is less energy to move it forward on a trail. “Running in winter is not only more demanding, it’s also slower,” adds Benoit.

The cold explains in part the lesser speed, but there is another, equally obvious factor, says ultra-trail runner David Jeker: the conditions on roads or trails.

“You can have an icy surface, a road that hasn’t been completely cleared, or be sinking into snow with each step,” says the athlete, who isn’t deterred by such details. Other than freezing rain, nothing keeps Jeker from training! Instead, he counsels, one needs to be more alert and focussed on where we’re placing our feet, even if it means reducing speed.

For all of these reasons, Jeker, who is also a trainer, recommends not worrying about speed and distance. “It’s easier to train for how you feel than how fast you’re going. It’s better to measure the overall training in terms of time, rather than kilometres.” Winter moves the performance goalposts, in other words! 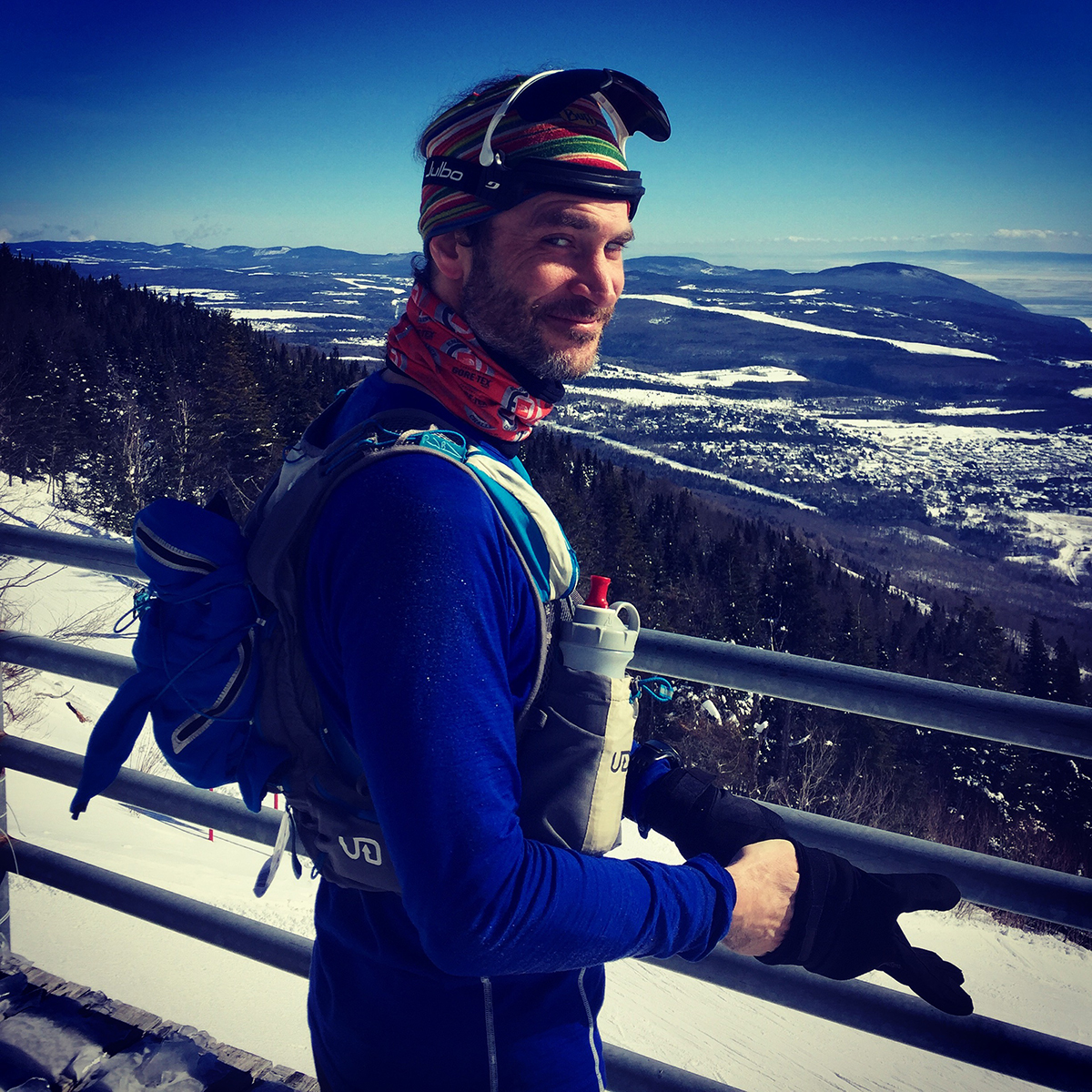 Don’t be a mouth-breather

Cold air, however, makes breathing more complicated. Your nose runs and air passages constrict (this is called a bronchospasm). It’s easier to breathe through the mouth, but experts recommend breathing through the nose if you can,

because “the air is filtered and warmed,” says Dr. Benoit.

Can wearing a scarf over the nose help? We might be tempted to think this will warm the air before we breathe it in, but Simon Benoit cautions: “It makes the respiratory muscles work harder; plus, the scarf ices up after a few breaths.”

That said, it is still a personal choice; some runners enjoy using a light scarf like a Buff, while others, including Sarah Bergeron-Larouche, don’t like to wear one at all.

It’s important to remember to drink fluids, even though it’s cold and we tend to feel less thirsty. When she runs in winter, Sarah Bergeron-Larouche likes to bring hot tea in an insulated bottle.

One should also eat during exertion, especially when we know that the energy expenditure can be twice as high during winter training.

The best bet is energy bars, maple syrup or other energy products that won’t freeze solid and that can be unwrapped or uncorked even with mittens. You’ll have to test which ones are right for you.

Products like these give the body the fuel it needs so that you can enjoy your run and maintain your energy levels until you get back home to that beautiful bowl of hot soup.

Warming up before a run is especially important in cold weather. “The joints are stiffer and the muscles tighter. You shouldn’t rush things,” says Simon Benoit. That’s sound advice, even though sometimes we want to get the warmup over and done with quickly.

Truth is, there’s a high probability that you’ll feel cold for a few minutes after you first go outside. “If you aren’t cold, it’s because you’re overdressed,” says Doc Benoit.

His prescription: start with clothing that will be suitable after 10 or 15 minutes. If you’re hot from the start, there’s a good chance your garments will be soaked with perspiration and make you feel the cold even more afterward. “Warm before means cold after,” warns Benoit.

The right apparel is whatever best works for you, say Benoit, Jeker, and Bergeron-Larouche. The recipe would seem to be founded on a first layer of merino wool, however.

In the end, the main thing to bear in mind is that pleasure comes with practice. Once you’ve settled into a routine and braved frigid conditions without any adverse effects, a run on “warm” days when the mercury is at one or two degrees Celsius will feel like a walk in the park!

Gearing up for fun winter runs 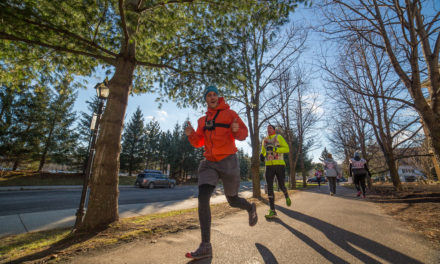 How to Prepare for Physical Exertion in a Cold Environment